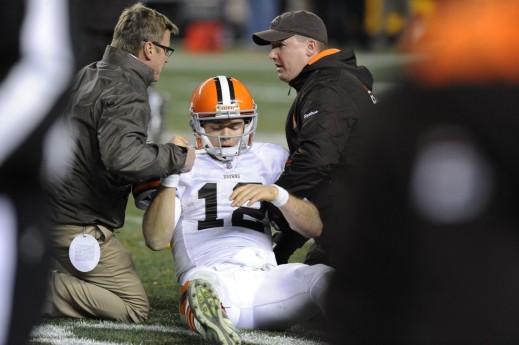 A doctor may not have diagnosed it, but I’ve had concussions.

I didn’t see Tweety Bird circling around my head, but I remember the headaches after an intense high school football game or practice.

The physicality was natural back then. Even though we were drilled to keep our heads up, we still took multiple blows to the head on a daily basis; using a helmet that I believe would keep me safe.

But in the end, our heads are eggs. No matter how tough the shell is, the yolk can still get messed up on the inside. And no, you can’t ever go back and fix it.

So like many Americans, especially those that played football at some point in their lives, and especially with my affinity for sports journalism, I eagerly awaited the outcome of the lawsuit against the NFL by former players seeking damages for the lack of head safety during their careers.

The civil suit was quite simple, actually, as the players wanted money for the sport they loved, which destroyed their brains beyond its natural ability to repair.

And the NFL won.

The settlement between the two sides will pay out $765 million over 20 years to more than 4,500 former players. As Deadspin showed perfectly, that’s hardly a dent (more like a small key scratch on the handle of the car door) compared to the more than $9 billion in operating revenue the league brings in each year. By the time it’s all paid out, the NFL would likely have made more than $180 billion. Yes, Billion.

But that monetary figure was not what I was most looking forward to.

Though it seemed unlikely the case would actually ever go to trial, I still had dreams. Even had the case gone into the discovery process and later resulted in a summary judgment, it would have shed some interesting light on the questions that the media would salivate over.

How much did the league know about concussions the last 20 years? At what point did the Shield know it had a problem on its hands? Did the NFL deliberately withhold information from the players under the fear it would not profit as much off the players that surrendered its long-term health?

Instead, the records and juicy information will stay behind a vault that is locked down tighter than Fort Knox, and it has an impact on all levels of the game because of the scant amount of information that is currently available on the topic.

In the future, that’s what will matter most. If society will subject its children to playing the game at such a young age, the number of cases like Austin Collie and Jim McMahon will just multiply. But if we can finally understand the brain, we can perhaps formulate a better plan for protection.

For me, that plan may have meant that I not play organized football until high school started instead of the four years prior. Maybe I wouldn’t have had as many full-contact practices. Considering my memory is not nearly what it used to be, I needed somebody who knew what was going on to look out for me.

So while I nor the NFL can go back and right the past wrong, there still is the capacity to make things better in the future, and I sincerely hope progress will be made.